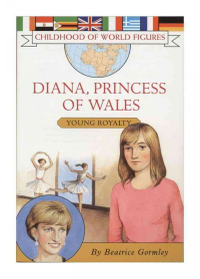 9999 of 9999 copies available
Report a Problem
Diana Spencer grew up to be the princess of Wales. But when she was a little girl, she did not dream she would become a princess. When she was still quite young, her older sisters went off to boarding school and her parents decided to live apart. This was very difficult for sensitive Diana, and her self-esteem began to suffer. Things were not helped when she began feeling inferior to not only an accomplished older sister, but also her clever younger brother. Diana was a good athlete and was gifted at connecting with other people. Still, she struggled to find her place in the world. Diana thought marrying the prince of Wales would make everything okay in her life. Joining the royal family did bring her some happiness, but in other ways it brought her tremendous pain.
Read about the little girl who struggled to find herself and became one of the most famous and beloved women in history.