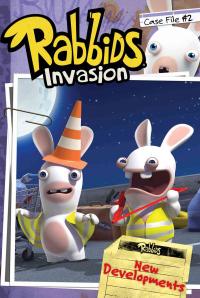 9954 of 9999 copies available
Report a Problem
In this second book of the hilarious and zany illustrated chapter book series, Agent Glyker continues his mission to capture a Rabbid and figure out what they’re all about.

Special Agent Glyker is hard at work tracking down the Rabbids—his job depends on it! Agent Glyker’s scary boss, Mr. Stern (who also happens to be his uncle), has issued him an ultimatum: capture a Rabbid OR ELSE!

But just when it seems like things might finally go Agent Glyker’s way, he has to choose between saving his job or saving his boss. What will the secret agent do?

Peek into Glyker’s top-secret files and laugh along as the Rabbids stay one step ahead of the poor agent…for now!