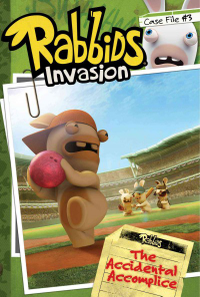 9951 of 9999 copies available
Report a Problem
In this third book in the hilarious and zany illustrated chapter book series, Agent Glyker’s quest to uncover the Rabbids’ secrets continues!

Agent Glyker of the SGAII-RD (Secret Government Agency for the Investigation of Intruders, Rabbid Division) has just been promoted to Secret Agent Second Class, and that means one thing: he now has his very own key to the Closet of Super-Secret Spy Gadgets. With all those neat devices at his disposal, he’s sure to capture a Rabbid in no time…right? Agent Glyker soon discovers that capturing a Rabbid won’t be as easy as he had hoped because while he has gained gadgets, the Rabbids have gained an ally. A very crafty, cunning ally named Courtney. She may look like an innocent teenager, but Agent Glyker is sure that Courtney is helping the Rabbids with their top-secret plan…whatever that may be!

Peek into Glyker’s top-secret files and laugh along as the Rabbids stay one step ahead of the bumbling agent…for now!